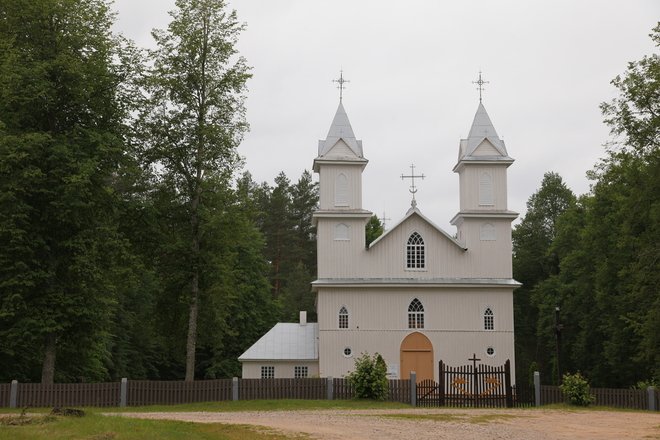 Rudnia is a small village at the Ūla River. Surrounded by pine forests, Rudnia has been known for a substantial number of Paleolithic settlements dating back 10,000 to 12,000 years ago. Presently, however, the locals are leaving in favor of better places and the village is slowly diminishing.

Flint mining near Lake Titnas. Prehistoric humans mainly used flint to make their tools as this sedimentary rock was easy to splint and had sharp edges. Due to vast resources of flint not too far away from Lake Titnas, people settled down around the present day Rudnia ages ago. Large ancient flint mines and workshops dating back to the Paleolithic Era (10 th -11 th century BC) have also been found in the area. This proves that some of the first residents of the modern day Lithuania had lived here. Flint tools, mostly comprised of fragments of picks, axes and hoes, have been discovered in all archeological sites.

Watermill ruins. The dam of the Ūla River has been mentioned in the written documents since the 16 th century. An iron foundry and plant stood nearby until 1841, when a flood destroyed both the plant and the dam. The buildings were rebuilt in the second half of the 19 th century. For some time, a sawmill, a smithy and a kersey fulling mill with a dyehouse had operated near the Ūla dam. In 1930, the entire watermill underwent vast renovations: a turbine was added, brick foundations were laid down, a sawmill, a combing plant and a kersey fulling mill were built. However, the watermill fell to ruins back in the seventies and only its foundations had remained intact.

Virgin Mary the Eternal Patroness Church. In 1910, a new masonry church was built in Nočia Village and a permit was given to transfer the old Nočia Church to Rudnia Village. The villagers of Rudnia bought the old wooden Nočia Church, marked its wooden logs and transferred them in horse-drawn carriages to Rudnia. However, despite the markings and the technical drawings prepared by A.Filipovičius-Dubovikas, the rebuilt church differed from the one in the plans or the one that used to stand in Nočia. This marked the beginning of the Rudnia Parish.